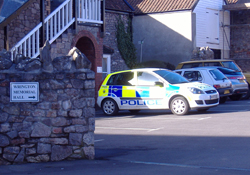 Policing in the parish is provided on behalf of the Avon & Somerset Constabulary by our Beat Manager,
PC Martin Faithfull, who is supported by PCSO Julie Berchall. They work from Nailsea Police Station and cover the parishes of Backwell, Brockley, Cleeve, and Wrington.

Further information about our local beat can be found on the Avon & Somerset Police website.

There is a police station within the parish at the airport, although the officers here have specific responsibilities related to Bristol Airport.  Further information about the station at the airport can be found on the Avon & Somerset Police website.

In an emergency the police should always be contacted on 999, with the 101 non-emergency number used for reporting a crime that has happened but is not currently in progress, for contacting local officers, for crime prevention advice or for advising of any other policing issues.  Rural/agricultural crime can also be reported by text to 07492 888109.

North Somerset Council and Avon & Somerset Police, in a joint initiative, have appointed 3 Community Response Officers to help tackle issues such as:- dog patrols, fly posting, fly tipping, illegal signage, neighbour disputes and graffiti. They can be contacted on 01934 888802,
community.response@n-somerset.gov.uk or followed on Twitter @NorthSomersetCR.

Neighbourhood Watch brings communities together to tackle problems such as burglary, vandalism, anti-social behaviour and vehicle crime and it’s suggested that you are four times less likely to be burgled if you are a member of a Watch scheme.  There are several local groups, with their focus on particular roads or small community groups.  Further information on the Neighbourhood Watch scheme can be found on Avon & Somerset Police website.