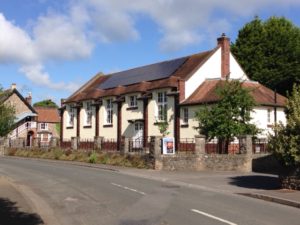 The Memorial Hall in Silver Street is one of several buildings which are managed on behalf of the Council by the Wrington Memorial Hall & Recreation Field Committee. The Hall is a valued community facility and is available for hire through Darren Dyer, Caretaker, on 01934 862898 / wringtonmemorialhall@outlook.com.  You can download a PDF of the various charges here.

All the buildings are now quite old, with the Hall foundation stone dated May 1923, and require ongoing maintenance and refurbishment work. This is an ongoing and potentially significant expenditure for the Hall Committee or the Council.  In recent years The Hall has been rewired and had a new double-glazed main window installed, both grant funded.  The kitchen has finally been refurbished, partially grant funded.  In addition, a PV/solar panel micro generation system has been installed on the roof, with insulation improvements to follow.